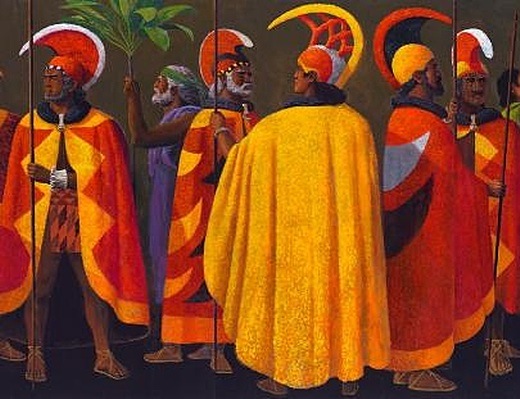 On this Election Day 2012, we thought we’d share a little of what “politics” looked like in traditional Hawaiian society. Enjoy!

The pre-contact political hierarchy of the Hawaiian Islands was rigidly organized, with a variable number of high chiefs controlling different parts of an island, a whole island, or several islands. Although historically there were several attempts by chiefs to expand their domain over other islands, none was successful until Kamehameha, who, in addition to possessing great intelligence and a strong personality, was aided by the weaponry and military expertise of European advisors. By the time of Captain Cook’s arrival, four high chiefs ruled the eight main islands of Hawai’i. One kingdom included Maui, Moloka’i, Lana’i, and Kahoolawe, while a second comprised Kaua’i and Ni’ihau. O’ahu and Hawai’i each had its own chief.

These independent chiefdoms were each ruled by a supreme chief, or ali’i-‘ai-moku (chief possessing an island or district); at times he was referred to simply as ke ali’i or ke ali’i-nui (the chief, or the great chief) to distinguish him from lesser chiefs. Ideally the ali’i-‘ai-moku was also the person of highest rank among the nobility. Therefore he was sometimes referred to as the king or Moi (mo’i, supreme male ali’i). Although individuals usually attained this position on the basis of genealogical inheritance, a junior collateral relative could also gain it by force or because he had the personal qualifications to make himself leader.

The ali’i-nui had complete control over his lands and its products, over the lives of his subjects, and over their personal property. He derived these rights from his close genealogical ties with the Hawaiian gods and was considered one himself. Generally the will of the ruling chief was the law of the land, but there also existed a large body of traditional or customary law relating to such things as water rights, fishing rights, and land usage.

Two high officers assisted the ali’i-nui with governmental functions. The kahuna-nui (chief priest) conducted important religious ceremonies, observed and interpreted natural phenomena, consulted the auspices for favorable omens, and advised the king on how to remain in favor with the gods. Although the king sometimes consulted his lesser chiefs on important matters, he relied mainly on his kal’ai-moku,a counselor who served as prime minister and chief administrative officer, advising the king on the distribution of lands and positions and on military strategy. This position was highly important because the judicious assignment of lands to chiefs and the maintenance of control over them was the key to successful governing. Larger districts, for example, were never assigned to the higher chiefs, thus preventing them from accruing enough power to rebel. The tie between these two counselors and the high chief was the strongest in the government in pre-European times. (With the collapse of the ancient religion in 1819, however, the power of the priests was broken and the position of kahuna-nui abolished.) The kahuna, occupational specialists, fit into this political structure at points depending on their genealogical ranking and specialty. Each ali’i-nui also maintained a court of advisors, religious specialists, and personal servants, which followed its leader from place to place within the kingdom.

After the ali’i-nui had gained power, either through orderly succession or victory in battle, he took the lands he wanted and divided the rest among his chiefs, who in turn rewarded their retainers, thus establishing a sort of feudal relationship. No system of permanent land tenure existed under the ancient system, because upon the accession of every new supreme chief, ahupua’a could be reapportioned among the high chiefs and ‘ili (smaller land divisions) among lower chiefs and supporters. It was to a new chief’s advantage, however, to maintain some stability relative to tenancy among the commoners to ensure a steady supply of food and goods. The chiefs below him to which the ali’i-nui allocated portions of his kingdom did not acquire title to the land but could use it, its products, its people, and their possessions. These chiefs then allocated use rights in their portion of the kingdom to chiefs below them and so on down to the lowest chiefs in the hierarchy. Just below the chiefly ranks were the konohiki,administrative functionaries who controlled a specific parcel of land, such as an ahupua’a, and who assumed responsibility for the smooth running of the sophisticated Hawaiian agricultural and aquacultural systems, the fair allotment of water, and the enforcement of fishing rights, and who collected taxes and supplied armies in case of war and laborers for state enterprises such as heiau and fishpond construction.

The blowing of the conch shell heralds the arrival of the ali`i nui, or high chief.

Commoners, the bulk of Hawaiian society, had no voice in political matters. The king held the authority to draft an army, assess taxes, condemn or pardon criminals, or banish subjects, all without appeal. Depending largely upon an ali’i-nui’s abilities as a leader, his people suffered or prospered. They did not feel irrevocably bound to their chiefs, however, sometimes dispossessing an unjust ruler, killing him, or moving to another kingdom if the situation became too unbearable. In addition, senior nobles, acting as tenants-in-chief, could transfer their fealty and form coalitions to replace a ruler. At the same time, each paramount chief ideally tried to expand his kingdom by conquering and incorporating rival chiefdoms. Overall, the pre-contact political situation in the islands was variable — disputes over succession, land control, and individual ambitions, and quarrels between neighboring districts, were frequent disruptions to a routine way of life.