The 1859 Eruption of Mauna Loa and its Human Impact. This image shows very clearly the recent lava flows (dark streaks) on Hawaii Island. This article focuses on the long lava flow that ends on the upper left portion of this map) Hawaii Island (the Big Island) (Enhanced Thematic Mapper plus (ETM+) instrument, flying aboard the Landsat 7 satellite)

It wasn’t until the late 20th Century that substantial development began along the Kona-Kohala Coast of the Big Island of Hawaii. Once virtually inaccessible to most people, there are now large areas covered by resorts. Many of the visitors who stay in the area are often unaware that the lava flows these resorts are built upon are not really that old at all.  The following “Volcano Watch” article comes from the Hawaiian Volcano Observatory (USGS) and talks about one very large lava flow that left its mark in the Waikoloa Resort area.

The 1859 eruption of Mauna Loa began in the evening of January 23. Following a brief summit eruption, an outbreak occurred high on Mauna Loa’s northwest flank at the 3380 m (11,090 ft) elevation. The eruption ultimately destroyed a coastal village and fishponds at Wainanali`i and Kiholo, on the west coast of the island.

This eruption is notable for several reasons. It is the most voluminous eruption in the post-contact period, and it produced a 52-km- (32-mile-) long lava flow, longest in the state. The eruption lasted for approximately 300 days, the second most lengthy of all Mauna Loa eruptions since the arrival of Europeans in Hawai`i. Furthermore, it is one of two historical eruptions from radial vents on the northwest and west flanks of Mauna Loa. The other radial eruption occurred in 1877, within Kealakekua Bay, just off Napo`opo`o.

During the initial stage of the 1859 flank eruption, two sets of subparallel fissures issued lava. The resulting flows moved as disorganized, anatomizing streams. People reported that, during the early days of the eruption, the glow from the eruptive activity was sufficient to allow one to read newsprint in Waimea! People on the south side of Maui saw the glow from across the channel.

Precursory activity was minimal. Mrs. Lyman, of Hilo, reported a few earthquakes in the months preceding the eruption, but just prior to the outbreak there was no significant earthquake activity to herald the onset of the eruption. The summit stage of the eruption was brief, and most people on the island did not know an eruption was in progress until the activity migrated down to the 2,135-m (7,000-ft) -level on Mauna Loa. Lava fountains reached 90 – 125 m (300 – 400 ft) high, forming several cones, the largest of which stands 45 m (150 ft) high and 76 m (250 ft) in diameter.

On the evening of January 30, the villagers of Wainanali`i were wakened by sounds of advancing lava and scrambled to remove personal effects from the path of the flows. Some villagers were taken by surprise and lost all their possessions. An `a`a flow reached the sea on the morning of January 31, eight days after the eruption started.

Lava flows advanced at speeds approaching 15 km per hour (ten miles per hour) on the steeper flanks of Mauna Loa and eventually slowed to a crawl as lava reached the saddle between Hualalai and Mauna Loa and the coastal plain. The average rate of advance was 6 km per hour (4 mph).

By March 7, `a`a flows gave way to pahoehoe. The eruption stabilized at a central vent, and open channels were supplanted by lava tubes as the flow field matured and the eruption developed toward a steady state. Pahoehoe eventually entered the sea south of Wainanali`i, at Kiholo, spreading out to fill the fishpond, extend the coastline for approximately 800 m (one-half mile), and form a lava delta that ultimately grew to nearly 3 km (two miles across).

The observers of this eruption were the first to postulate how `a`a forms. They recognized that `a`a and pahoehoe were identical chemically and that `a`a formed as a result of the lava cooling and thus impeding its ability to flow. Another keen observation was that lava tubes could enlarge by way of downcutting through the volcanic pile.

The eruption severely impacted the local community, filling fishponds, which were valuable resources and a symbol of a king’s stature and prowess. Furthermore, the residents lost the use of a small, sheltered bay, and the district lost a coastal community. 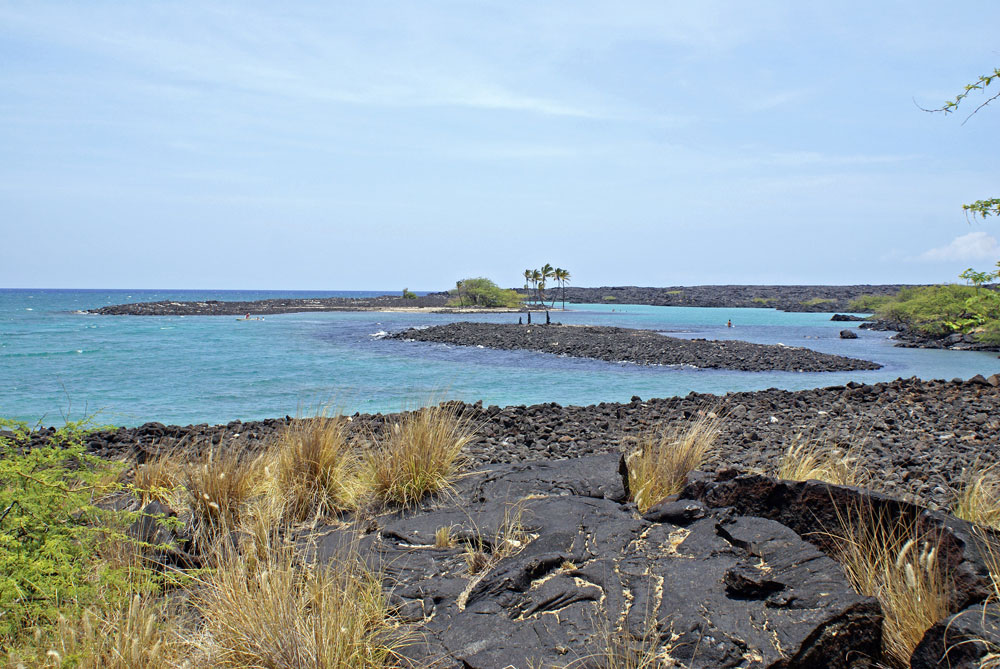 Lava flow hazard is not only a modern-day phenomenon that affects those of us who live on active volcanoes. In the days of old, volcanic eruptions threatened the socio-economic fabric of the island. If a similar eruption occurred today, it could potentially reach the hotels from Waikoloa to Puako, affecting the Big Island’s economy in a big way. Volcanic eruptions have been, and will continue to be, cause of concern. With continual development, this issue will become more acute, accentuating the risks and economic impact of eruptions.

from → Hawaiian Volcano Observatory USGS
← How Hot is the Lava?
This Morning’s Close Encounter with Sharks →
No comments yet