Retired U.S. Army Command Sgt. Maj. Sterling R. Cale, and a 90-year-old Pearl Harbor survivor, takes a moment in the shrine room of the USS Arizona Memorial to honor the 1,177 service members who lost their lives during the attack on the USS Arizona Dec. 7, 1941. (U.S. Air Force photo by Tech. Sgt. Michael Holzworth/Released)

When we remember the  attack on Pearl Harbor, we don’t just remember it as merely an important event to be relegated to some dusty pages of  history books. What transpired on the morning of Sunday, December 7, 1941 on and around the Island of Oahu, Hawaii affected real people. The pain, fear, and shock of those terrible moments were surpassed by the overwhelming courage, honor and bravery exhibited by both military personnel and Hawaii’s civilians. Of course the attack on Pearl Harbor 71 years ago today did change the course of world history. But for the individuals who lived through that terrible day and the years of war that followed, December 7, 1941 remained etched into their personal memories, as well as the collective memory of the entire Nation.

In addition to the photos included on this post, we encourage you to take a few moments to look at the names of the casualties from that day. Beyond the twisted metal and steel of the ships and aircraft damaged on that fateful morning, as you look at these photos we encourage you to remember the lives that were lost and the lives that were forever changed.  May we always “Remember Pearl Harbor.” 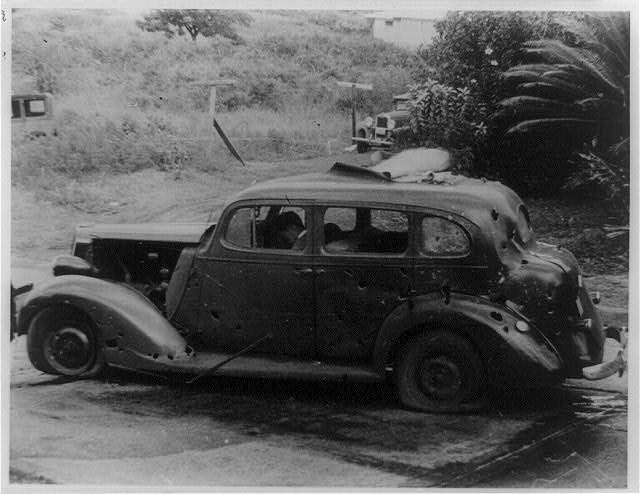 Three civilians were killed in this shrapnel-riddled car by a bomb dropped from a Japanese plane eight miles from Pearl Harbor, Hawaii, December 7, 1941. Library of Congress

Beneath a leaden sky on 8 December 1941, Marines at NAS Kaneohe Bay fire a volley over the common grave of 15 officers and men killed during the Japanese raid the previous day. Note sandbagged position atop the sandy rise at right. National Archives Photo 80-G-32854

Harold Johnson, a Pearl Harbor Survivor assigned to USS Oklahoma, places a flower on one of the 429 marble slabs that make up the USS Oklahoma Memorial. Pearl Harbor survivors, friends and family gathered at the memorial to pay their respects to the Sailors and Marines who lost their lives aboard Oklahoma 70 years ago. (U.S. Navy photo by Mass Communication Specialist 3rd Class Sean Furey/Released)

U.S. military aircraft and hangars burn after being bombed during the Japanese air attack on Wheeler Air Field, Hawaii, Dec. 7, 1941. The aerial view was captured from a Japanese Navy plane. U.S. Navy photo

We will be posting photos and videos from today’s ceremonies at Pearl Harbor, so check back to this site during the day. Aloha