Photo Provides Window into an Eruption and a Revolution

“Stevens and Party at Kilauea” – U.S. Minister Stevens is second from the right. Demosthenes Lycurgus and Alex Lancaster are first and second from the left, respectively. (USGS)

The following is this week’s installment of “Volcano Watch” from the USGS Hawaiian Volcano Observatory:

To the scientists who monitor the Puʻu ʻŌʻō crater, the scene in this photo seems familiar. A rising lava lake forms a symmetrical, perched lava pond as frequent overflows build steep levee walls higher and higher.Similar volcanic features have been described and photographed several times in recent years at Puʻu ʻŌʻō, but this image is very old. The photo appears to show a lava lake within a pit crater located inside Kīlauea Caldera. Sometimes called Dana Lake, this molten pond was a popular tourist attraction for visitors to Kīlauea between 1890 and 1894. It is featured in many old photographs, as well as in a wonderful painting by volcano artist, D.H. Hitchcock.

But HVO’s copy of this old photo from the Hawaiʻi State Archives has no label at all. When was it taken and who were the visitors?

A recent visit to Bishop Museum and some additional research have provided surprising answers. At Bishop Museum, we found another copy of the same image, which provided a date of 1893 and a label, “Gov. Stevens and party.” Other persons identified in the Bishop Museum print included Demosthenes Lycurgus, Peter Lee, and Alexander Lancaster. Peter Lee managed the Volcano House hotel at the time, and Alexander Lancaster was a famous volcano guide. Demosthenes Lycurgus and his brother George would later succeed Peter Lee as Volcano House managers.

But who was Gov. Stevens? Hawaiʻi had island governors in the 1890s, but there were none with this name. A close look at the photo shows that the second man from the right bears a strong resemblance to John L. Stevens, U.S. Minister Plenipotentiary and Envoy Extraordinary to the Kingdom of Hawaiʻi. 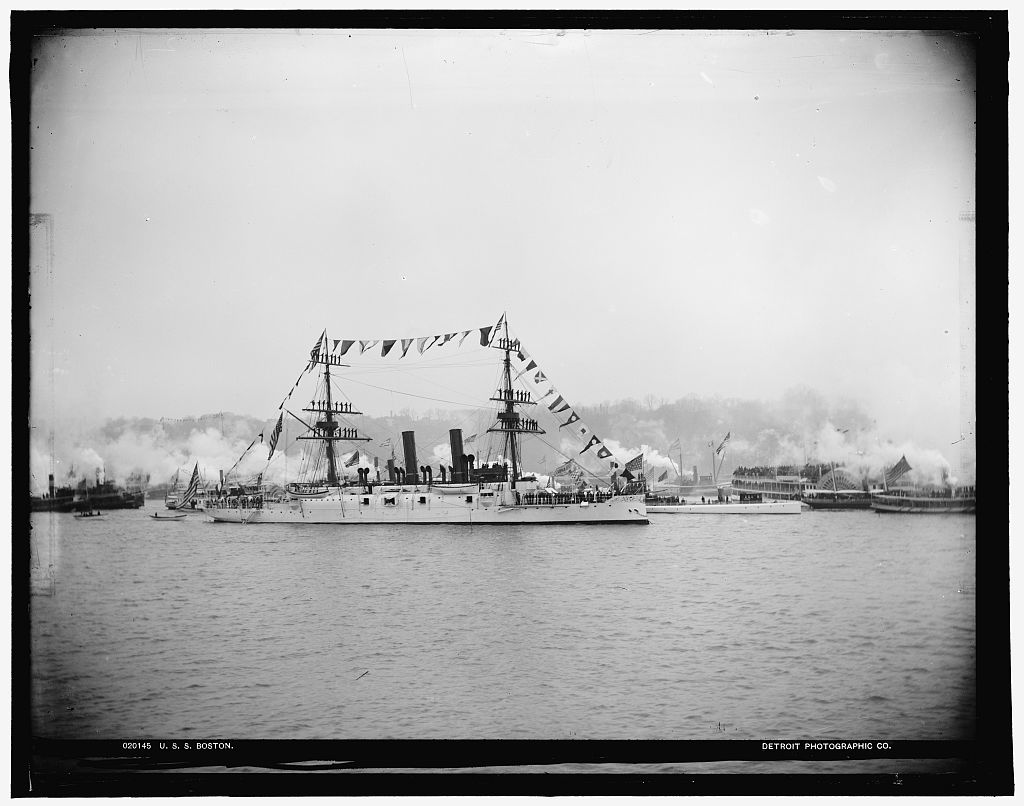 Based on that clue, Martha Hoverson, a volunteer librarian at Hawaiʻi Volcanoes National Park, found references to a voyage to Hilo made by U.S. Minister Stevens and his daughter, Grace, on the American gunboat U.S.S. Boston. They arrived in Hilo on January 5, 1893, and toured the volcano the next day while the ship conducted a gunnery practice in Hilo Harbor.

U.S. Minister Stevens and the U.S.S. Boston returned to Honolulu on January 14, just in time to play a pivotal role in the history of Hawaiʻi. That very morning, Queen LILIUOKALANI disbanded the legislature and attempted to proclaim a new constitution for the kingdom. Stevens met with the “Committee of Public Safety,” a group composed mostly of American businessmen, that afternoon. Two days later, at Stevens’ request, Marines from the U.S.S. Boston were dispatched into Honolulu, altering the balance of power between the political factions that were competing for control of the kingdom. Queen Liliuokalani, last royal ruler of Hawaii just before her death in 1917. (Library of Congress)

We don’t know who took this remarkable photo 120 years ago, but we do know that the photographer captured an important moment in the geologic and political history of Hawaiʻi. The most recent image from a temporary research camera positioned at the Halemaʻumaʻu Overlook Vent. (USGS)

A lava lake within the Halemaʻumaʻu Overlook vent produced nighttime glow that was visible from the Jaggar Museum overlook and via HVO’s Webcam during the past week. After recovering slightly from a deflation-inflation (DI) event at Kīlauea’s summit two weeks ago, the lava lake level dropped again this week during the deflation phase of another DI event. This deflation had not yet transitioned to inflation as of this writing (Thursday, December 27).

On Kīlauea’s east rift zone, surface lava flows remain active on the coastal plain, but were not entering the ocean as of December 27. The active flows straddle the eastern boundary of Hawaiʻi Volcanoes National Park. Within Puʻu ʻŌʻō, glow and small, sporadic lava flows emanate from openings in the northeastern, northwestern, and southeastern parts of the crater floor.

No earthquakes were reported felt in the past week on the Island of Hawaiʻi.

from → Hawaiian Volcano Observatory USGS
← This is the Rainy Season?
January is Volcano Awareness Month! →
One Comment leave one →