Every Week is “Shark Week” in Hawaii’s Pelekane Bay

Want to go for a swim? Probably not the best idea in Pelekane Bay! (NPS)

Submerged just offshore Pu’ukohola Heiau National Historic Site are the ruins of what is believed to have been a  temple, which local lore relates was dedicated to the shark gods. The ancient Hawaiians believed in animal helpers and protectors, half god and half human, who relayed their counsels through the lips of some medium who became for the moment possessed by their spirit. These ‘aumakua were served and worshipped by particular families, this duty being passed down through the generations. 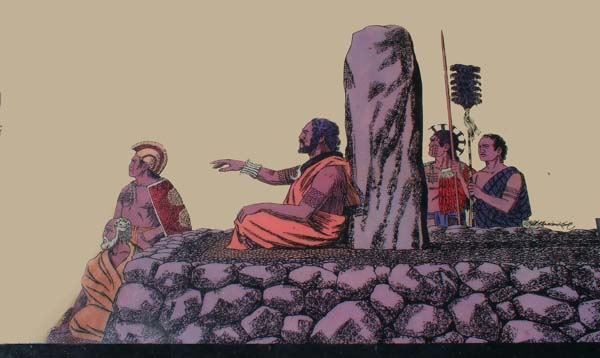 Kikiako’i, a stone leaning post, was used by one of King Kamehameha’s chiefs named Alapa’i Kupalupalu Mano. It was from this stone that the chief would observe as offerings were made at Hale o Kapuni Heiau in Pelekane Bay.

Some say that each locality along the coast of the Islands had a “special patron shark whose name, history, place of abode, and appearance were well known to all frequenters of that coast.” Shark gods were invoked with specific prayers, and temples were erected for their worship. There were several well-known shark gods worshiped at various places in the Islands. Among these were Uukanipo, two great sharks who were twin brothers, and another called Kaaipai, all of whom lived at Kawaihae (where Pu’ukohola Heiau National Historic Site is located).

Today, it is impossible to see Hale of Kapuni Heiau. Through the construction of the nearby Kawaihae Harbor in the 1950’s, as well as tsunamis, the temple is no longer visible. Even though it is impossible to see the temple, the sharks are a popular attraction for many Park visitors. In the early morning hours, you can usually see the sharks plying the waters just offshore, near where the temple is believed to be located. Come by one morning and see for yourself! http://www.nps.gov/puhe