Hawaii Island 1929: Most ranch people camped outdoors during the earthquakes of October, 1929, fearing death or severe injury from collapsed buildings if they stayed indoors. Looking southeast toward Puʻuwaʻawaʻa from Puʻuanahulu, with Hualālai Volcano in the haze (vog?) at the right. (Photo by Thomas Jaggar; USGS)

Two of Hawaiʻi’s largest historical earthquakes occurred during an intense swarm of more than 6,200 earthquakes beneath Hualālai volcano between mid-September and early November 1929.  During the early part of the swarm, a magnitude-6.1 earthquake on September 25 was followed by a magnitude-6.5 earthquake on October 5. Both events generated strong ground shaking on the Island of Hawaiʻi, causing significant damage, especially in Kona, to houses, masonry, water tanks, pipes, stone fences, and roads.  Both earthquakes were felt as far away as Oʻahu and were followed by strong aftershocks that added to the damage. As the anniversaries of these earthquakes approach, a quick review of the 1929 earthquake sequence provides a vivid reminder of the hazards associated with strong earthquakes in Hawaiʻi. It also reminds us that Hualālai is an active volcano. 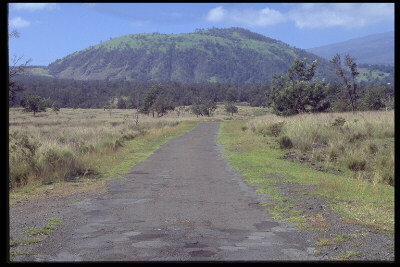 At the time, the seismic network in Hawaiʻi was extremely limited, by today’s standards, so the estimated locations and magnitudes of the earthquakes are not well-known. When the swarm began, the nearest seismometers were located at Kealakekua, Hilo, and the Hawaiian Volcano Observatory. A temporary station was installed by September 21 at the Puʻuwaʻawaʻa Ranch near the center of activity.  Based on the pattern of ground-shaking, as reported by island residents, the September 25 earthquake is estimated to have occurred at a depth of less than 15 km (10 miles). The October 5 event is characterized as being deeper than 15 km.

The swarm of earthquakes began on the afternoon of September 19 and was first felt by people living near Puʻuwaʻawaʻa Ranch, 11 km (7 miles) north of Hualālai’s summit. During the next few days, the earthquakes increased in number and intensity. Frank Greenwell kept count of the earthquakes felt at his residence 10 km (6 miles) southwest of Hualālai’s summit and reported them to the observatory. He recorded 444 felt quakes over a 3-day period, averaging 6 felt quakes per hour. There were even more earthquakes that were not felt. During the first 5 days of the swarm, a seismic station at Kealakekua recorded up to 280 “disturbances” per day. The temporary station at Puʻuwaʻawaʻa Ranch recorded the highest number, with a peak of 599 earthquakes on September 26.

View of the volcano Hualālai from Kaloko-Honokohau National Historical Park, on the Kona side of the Big Island of Hawaii. (Photo used by permission)

During the first week of the seismic crisis, Jaggar and his colleagues could not be certain whether the earthquakes were associated with Mauna Loa or Hualālai, or both. With the quakes seeming to be located between Mauna Loa and Hualālai, observatory scientists expressed early concern about the potential eruption of the more active Mauna Loa. Dr. Thomas Jaggar, Director of the Hawaiian Volcano Observatory (1912-1940), visited the summit of Hualālai on September 22 and found no fresh cracks or signs of heat or new steaming vents. A flight over the island with the Naval Air Service on October 3 revealed nothing unusual on the volcano and no lava outbreaks. After the September 25 magnitude-6.1 earthquake, however, the Honolulu Advertiser quoted Jaggar as saying “We may expect an eruption, possibly from the northwest flank of Hualālai within a month, if the earthquakes which have shaken the island of Hawaiʻi for the past five days, particularly in the Kona district, continue.”  The earthquakes signaled to Jaggar that magma was moving upward in the direction of Hualālai.

By the middle of October, the frequency and intensity of earthquakes had diminished substantially, although a few events were still felt in Kona. The seismic crisis—which caused significant earthquake damage but resulted in no eruption—was essentially over by early November. The 1929 seismic event is a good reminder that Hawaiʻi residents have, and will again, experience destructive earthquakes and should be prepared for the next “big one.” To that end, we encourage you to participate in the upcoming Great Hawaii ShakeOut earthquake drill. More information is posted at http://shakeout.org/hawaii/.