The Hawaiian “paniolo” culture began in the 1800’s with the influence of Mexican vaqueros. In this photo, cattle are being taken out to a steamer at Kawaihae on Hawaii Island.

For well over 200 years, Hawaii has experienced a surprisingly rich Hispanic heritage. In fact, there are some who speculate that the Spanish may have actually arrived in the Islands prior to Captain Cook. According to one source:

Spanish tradition indicates some not-well-substantiated discoveries of
the Islas del Rey, Islas de los Jardines, Islas de las Tablas, or Islas de la
Mesa, all or any of which might have been Hawaii. (See: The Spanish in Hawaii: Gaytan to Marin)

What we do know is that sometime in the early 1790’s, when Kamehameha the Great was consolidating the Hawaiian Islands, it is believed that a foreign ship arrived in Hawaii with a young Spanish adventurer, Don Francisco de Paula y Marin. Although he served the King and the foreign delegations as an effective translator and negotiator, his most lasting achievement was in the field of agriculture. 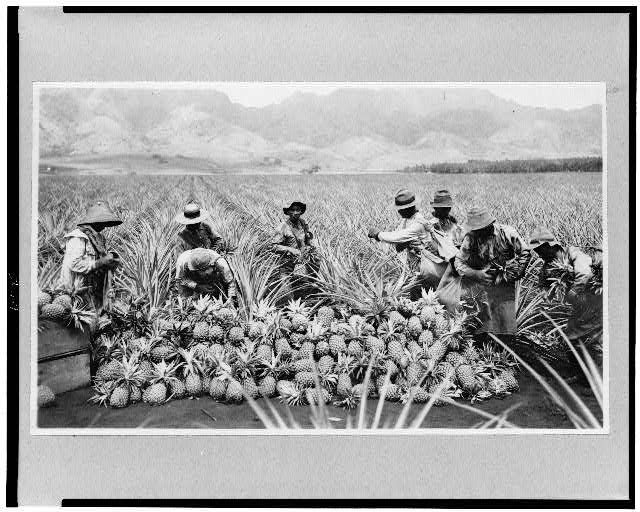 Although today the image of a fresh Pineapple is one of those symbols people often associate with Hawaii, this “Hawaiian” fruit was actually brought here from South America. “Scene on a pineapple plantation, with harvested pineapples, Hawaii” (Courtesy Library of Congress)

It is widely held that Marin introduced the first pineapples and coffee to the Islands in the early 1800’s. Both of these crops eventually became important economic resources for Hawaii well into the 20th Century. According to translations of his journal, by 1820 he had planted, pineapples, oranges, beans, cabbages, potatoes, peaches, chirimoyas, horse radish, melons, tobacco, carrots, asparaus, maize, fig trees, lemons and lettuce and had been engaged in processing sugar and in making kukui oil, cooca nut oil, candles, tiles, hay, cigars. As well, Marin served as a sail maker for visiting ships, a butcher, cook, mason, ship carpenter and physician, among many other endeavors.

In 1819, he was sent to Hawai`i Island to attend the ailing Kamehameha as his physician and was present at his death on May 8, 1819. Very literally Marin helped plant the first seeds of what would become the major economic engine of Hawaii for well over a century. As a side note, it is also believed that he was the first non-Hawaiian to be given possession of Ford Island (see: History of U.S. Naval Air Station, Pearl Harbor). But of course Hawaii’s Hispanic heritage did not stop with him.

With the first cattle being brought to Hawaii in the early 1790’s, there arose the need to be able to handle the vast herds that roamed freely in Hawaii. In the early 1830’s Kamehameha III at the advice of John Palmer Parker contracted the first Mexican vaqueros to help teach the Hawaiians how to manage and maintain their cattle. These vaqueros, called “paniolos” (Hawaiian pronunciation of “espanol”), trained Hawaiian men how to rope and herd the cattle…years before such activities would be associated with the “Wild West” in the United States. This “paniolo” culture still exists in such places as Waimea on the Big Island, whose Hawaiian cowboys have won world-wide fame in rodeos for well over a century, including at the prestigious Cheyenne Frontier Days in Wyoming.

Around 1900, Puerto Ricans immigrated to Hawaii to work on the plantations. Besides bringing their language with them, these new immigrants to Hawaii brought their distinctive culture, music and food to the Islands. Today, well over 30,000 Puerto Ricans live in Hawaii and many have served in important posts in government and in business.

Of course these are but a few examples of the great influence Hispanic Americans have had on the culture and history of Hawaii!