Haleakalā National Park will hold two public meetings to outline proposed fee increases
scheduled to begin in 2015. Meetings are scheduled on Wednesday, November 5, 2014 from
5pm to 6:30pm at the Hannibal Tavares Community Center in Pukalani and on Wednesday,
November 12, 2014 from 5pm to 6:30pm at the Helene Social Hall in Hana. The public can also
fill out comment cards at any park visitor center during business hours, bring written comments
to any park visitor center, mail comments to the park superintendent, or submit comments to the
online Planning, Environment, and Public Comment System (PEPC) at
http://parkplanning.nps.gov/halefeescomments. Feedback from the public will inform how, or if,
a fee increase would be implemented. To be considered, comments must be received on or
before December 15, 2014.

As proposed, Haleakalā National Park daily fees would be raised incrementally each year
between 2015 and 2017. The per-person fee would change from the current rate of $5 to $12 in
two-dollar increments per year. The motorcycle fee would go from $5 to $20, in $5 annual
increases. The per-vehicle pass would be raised in $5 increments from the current price of $10 to
$25 in 2017. In an effort to reduce the immediate impact of increased fees to local residents who
visit the park frequently, the cost of annual tri-park pass would remain at the current rate of $25
in 2015 and 2016, and then increase to nationwide standard of $50 in 2017. The annual tri-park
pass permits unlimited entry into Haleakalā National Park, Hawai`i Volcanoes National Park,
and Pu’uhonua o Hōnaunau National Historical Park for one year. Hawai`i Volcanoes National
Park is proposing the same fee changes and implementation schedule as Haleakalā National
Park.

“We are committed to keeping the park affordable but we also want to provide visitors and
residents with the best possible experience,” said park superintendent Natalie Gates. “The
revenue from entrance fees is used to improve visitor facilities, including visitor centers and
restrooms; restore recreational trails; sustain our native wildlife species and landscapes; and
provide important visitor services such as brochures, exhibits, web-based museum exhibits and
cultural demonstrations. The entrance fee program also funds school programs, community
outreach, and the park’s internship program.”

Some past examples of work which was fully funded with entrance fees include: building new
restrooms, providing potable water to visitors, and building a parking lot in the park’s Kīpahulu
District ($2.75 million, in 2000); restoring trails throughout the park ($500,000 annually); and
completing archeological surveys ($499,500 in 2010). Entrance fees also supported the control
of invasive species ($299,000 in entrance fees, in 2013); stabilization of silversword populations
($60,000 annually, 2012-13); and restoration of native landscapes ($113,000 in 2013). Increased
fee revenues will provide more funds for these and other types of projects. 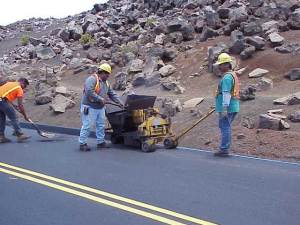 The current National Park Service fee program began in 1997 and allowed parks to retain 80% of
monies collected. The remaining 20% has gone into a fund to support park units where fees are
not charged. Prior to 1997 all national park fee monies went back into the General Treasury.
Since 1997, fee revenues have funded $36.6 million in Haleakalā National Park projects.

Currently-priced entrance fee revenues are estimated to total $14 million between now and 2020.
If the proposed fee increases are implemented, the estimated revenue from 2015 through 2020
could double to $28.4 million. In 2013, 785,300 visitors to Haleakalā National Park in 2013
spent over $47 million in communities near the park. That spending supported 536 jobs in the
local area.

Written comments may be mailed to: HALE Proposed Fee Increase, c/o Superintendent,
Haleakalā National Park, P.O. Box 369, Makawao, HI 96768. Comments will not be accepted
by FAX, e-mail, or in any manner other than the methods specified. Bulk comments in any
format (hard copy or electronic) submitted on behalf of others will not be accepted. Before
including a personal address, phone number, e- mail address, or other personal identifying
information in written comments, anyone providing written comment should be aware their
entire comment – including their personal identifying information – may be made publicly
available at any time. While anyone wishing to comment may ask the National Park Service
in their comment to withhold their personal identifying information from public review, the
National Park Service cannot guarantee it will be able to do so.