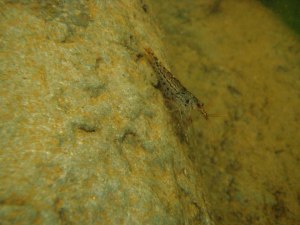 Description:  These endemic Hawaiian freshwater shrimp can grow to a length of about 2 inches. They do not have claws like the invasive Tahitian prawn (Macrobrachium lar) but rather have pincers with bristle-like hairs, which can be extended to form a fan used to catch and filter food particles from the water column.

Habitat & diet: ‘Ōpae kala‘ole are superb climbers and can be found in the highest stream reaches in Hawaii. They prefer to be in and around rocks in the fastest flowing part of the stream. Here is the really cool part. They have two distinct feeding patterns. The first is used in strong currents. They position themselves in the direction of the current, then they spread out the bristle-like hairs on their front legs to form tiny baskets. These baskets allow them to catch particles coming toward them with the current. They then put the food particles directly into their mouths. The second feeding method is used in slow moving waters. This behavior is common among other crustaceans. It involves simply using their pincers to extract food items from the stream floor.

Reproduction: Breeding occurs all year round in Hawaiian streams. More often than not, when you come across a female of the species, she will be carrying eggs. She carries about 3,000 eggs attached to her swimmerets on the underside of her tail. The eggs hatch after about 2 months. As with other native Hawaiian stream animals ‘ōpae kala‘ole are amphidromous. The newly hatched larvae wash down the stream and into the ocean where they develop for several months before returning back to a stream where they will spend the rest of their lives.

Tidbit: These ‘ōpae are known as some of the best climbers in the whole Hawaiian stream community. They have been found upstream of 100 foot waterfalls. These resourceful little critters have also been found in storm drains, agricultural ditches, and taro fields.

Threats: Habitat loss and degradation is one of the biggest threats to ‘ōpae kala‘ole and other stream animals. An increasing human population on the Hawaiian islands is leading to changes in the way streams naturally flow. Streams have been diverted, channelized, and dammed to accommodate city infrastructure and agriculture. This results in reduced water flow, higher temperatures, and an abundance of harmful introduced species.

‘Ōpae kala‘ole in Pacific island national parks: The Inventory & Monitoring Program monitors stream animal populations annually as well as stream water quality parameters every quarter. These special shrimp are found in abundance in the upper reaches of Waikolu Stream in Kalaupapa NHP and Palikea Stream in Haleakalā NP. The upper reaches have the fast, cool, and clear waters that the ‘ōpae prefer. They also have significantly fewer invasive species like the Tahitian prawn. Click here to see a simple video of this ‘ōpae in a stream.

Check out this U.S. Forest Service video about these cool little shrimp